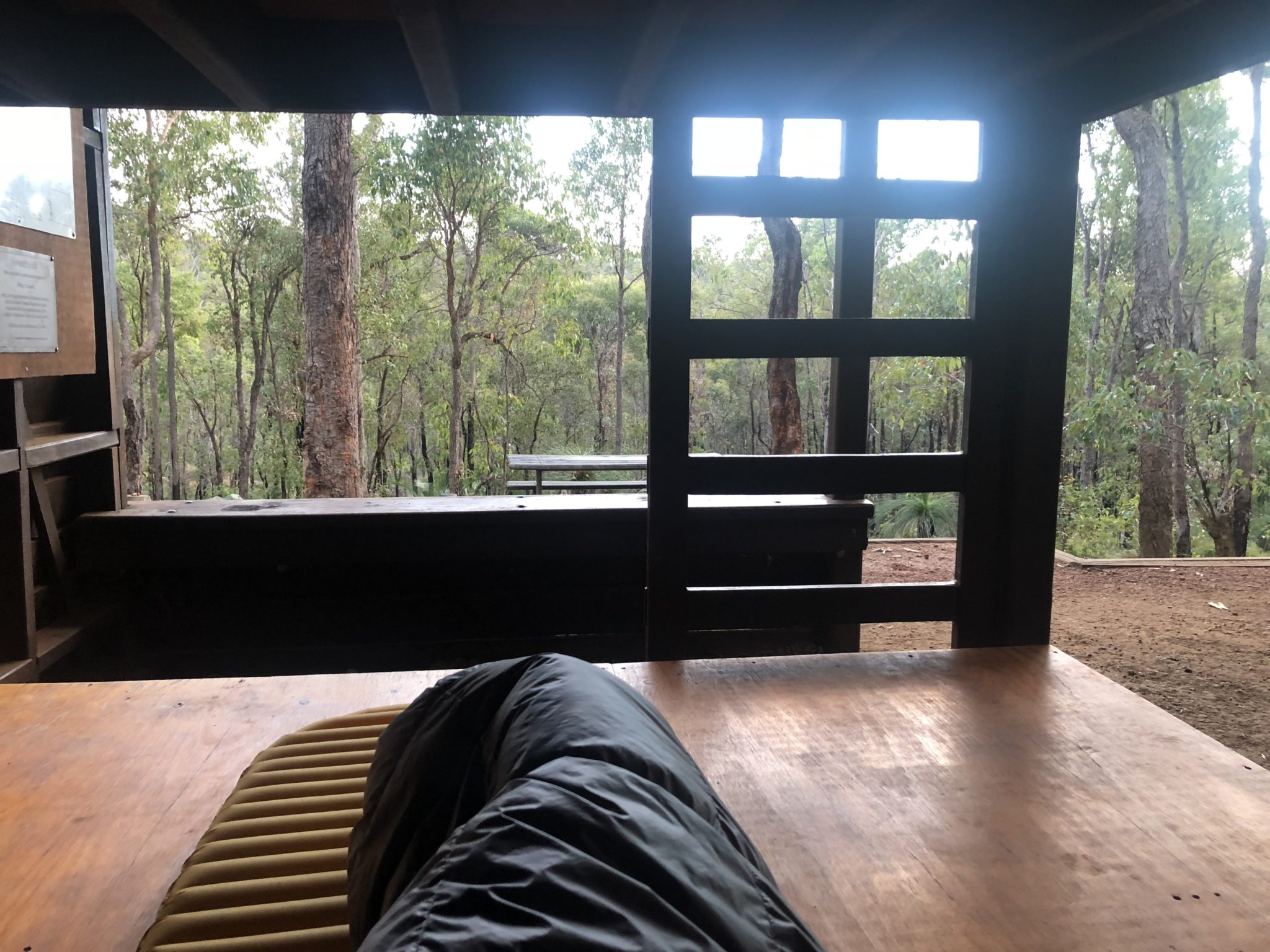 It’s the 36th day since I started my journey on 9 August 2018 on the Bibbulmun Track (this post is day 37 as I’ve included my original travel day to get to Albany).  I wake up after a sleep in and today for the first time the realisation I will finish the track today hits me.  I have spent the last five weeks living the Bibbulmun Track and this adventure is far longer than the two week stints I have done previously in various locations and even the length and timeframe makes a difference.  I have always found on a two week trip that I spend the first week unwinding and then the second week thinking about work the following week. With five weeks there is only the track; I have pretty much lived the track for this period.

I get up and go through a familiar routine I have used for many years.  I start the day the same way, and it’s one foot in front of the other; left right, repeat.  In fact since I’ve started this journey I’ve taken 1,509,700 steps with my biggest day being just a smidge over 44km.  For the last few days my body has told me that it’s time to stop, but not today.  Today my body is quiet, it knows I won’t believe it given that it’s the shortest day on the track; it’s now a mental game.  I only have just on 10km to do but I’m slow to get away from camp leaving at around 8:20am after chatting to the couple who were there last night.

This is my latest start since the first day and the realisation this is my last day is slowing me down.  I want to spend more time on the track, this familiar thing in my life and this 10km will turn out to be the slowest of the whole trip.

Apart from the late getaway I stop after 10 minutes to record a video.  This is something I have been doing every day but today it’s a delaying tactic.  The emotion hits me and after 12 attempts to record what I want to say the emotion is getting to me each time so I give up and move on and try again.  I manage to record my video, upload it and press on.  Just on 2.5km later I reach the Camel Farm and ‘oh look they sell icecreams’ so I have another excuse to stop.

I finally press on deciding that the trail designers have a sadistic bent as I approach the final steep descent then another final steep ascent to reach the northern terminus that signifies the end of the trail.  The ascent poses no problem but again it’s careful steps going down as the last thing I want is to roll an ankle in the final few kilometres as it’s wet (it’s been raining) and rocky.

And finally at 11:30am I reach the northern terminus; my journey is finished.  There’s elation but also a sense of sadness that this trail which has been my life for the past five weeks is now done.  I have read about the mixed emotions from other long distance hikers who blog and now I’ve experienced it first hand.

I head to the visitor centre which is just down the road and sign off in the trail book and ring the ceremonial bell which signifies my journey end and I’m now back in blogging mode recording the sound for use in the podcast.  At this stage I feel at a bit of a loss.  Is this it?

I arrange a taxi and head to a friend’s place which is a godsend.  It allows me to strip off the grimey clothing I have been wearing for the past five weeks and have a long shower.  By this stage it’s nearly 2:00pm and I’m starving so I head down to the local shops for lunch.  I’m also trying to find a barber to loose all the hair.  I’ve never had a beard or moustache in my life, partly from my family genetics that provide me with the world’s slowest facial hair but also because I like to be clean shaven.  I end up getting an Uber (my first) to a nearby suburb to a barber.  There’s nothing like a shave with a cutthroat razor to make you feel clean.  I now look closer to what I did when I started, minus some weight.  It’s back to my friends for a curry dinner and some socialising which is greatly appreciated.

It’s now nearly 11:30pm as I finish this post.  To some extent I’ve been hiding from social media today but finally a sense of normalcy returns and it’s time to tidy up the details.  Tomorrow I have a podcast to edit and publish and just one final daily post.

Me ringing the bell to signify the completion of the track and my morning view from my sleeping bag at the Hewetts Hill campsite, my last night on the trail