Choose your own adventure

There are literally thousands of marked or signposted hiking trails across every state and territory of Australia and even the keenest hiker is unlikely to ever hike them all. Having said that sometimes you want to do something that is just a little bit different. In my case when recently doing a local walk I realised that by being creative I was able to combine two seperate walks into one, creating the opportunity for a different experience that individually these walks didn’t provide.

Creating your own adventure can range from the ‘simple’ that requires minimal skills and planning, all the way up to the ‘highly complex’ that requires you to navigate off track, through remote areas, with the use of advanced compass and map skills.

In this article we look at simple opportunities for creating your own hiking adventures that with a bit of basic knowledge and planning almost anyone can do using an example that we experienced ourselves.

A seed of an idea

Typically we stick to the designated and marked walking trails which allow us to provide reviews of walks that other hikers can easily find and undertake. However we recently found ourselves finishing of a series of walks in the southern section of Namadgi National Park on the outskirts of Canberra and while doing one walk in particular we stumbled across an opportunity to create our own adventure by connecting two seperate walks.

I do say stumbled because I wasn’t paying attention and took a wrong turn! In the process I realised that if I had continued on the incorrect route I would have connected up to another well-used trail. While this wasn’t something we had planned it did spark a ‘what if’ moment that saw us head back to the same area the following weekend to see what this walk was like.

While there is a general set of steps to planning a hike to ensure its safe and enjoyable, when moving away from a designated walk and creating your own adventure there are some other considerations to think about before you start walking.

Tools to help you

Australian states and territories all have a series of National Parks, State Forests and Nature Reserves that are designed to help preserve the natural environment but at the same time create recreational opportunities for the general populous. Many of these parks and reserves will contain marked and signposted walking tracks that will typically start on trailheads and consist of dedicated trail tracks, management road or both. For the more heavily used and well known parks there will often produce paper based maps either as a dedicated documents, part of a reserve guide or at the very least offer online maps you can print out. Do your research at home when you have plenty of time to plan and consider. If you own a GPS, or for that matter a mobile phone with a GPX viewer (electronic map) you can create a ‘route’ to carry with you that will show you if you have gone off trail.

In addition you also have the opportunity to purchase paper topographic maps although this is becoming less common. The other option is to download online maps or use Google Earth. There is no end to the resources available and some of the more common ones include: 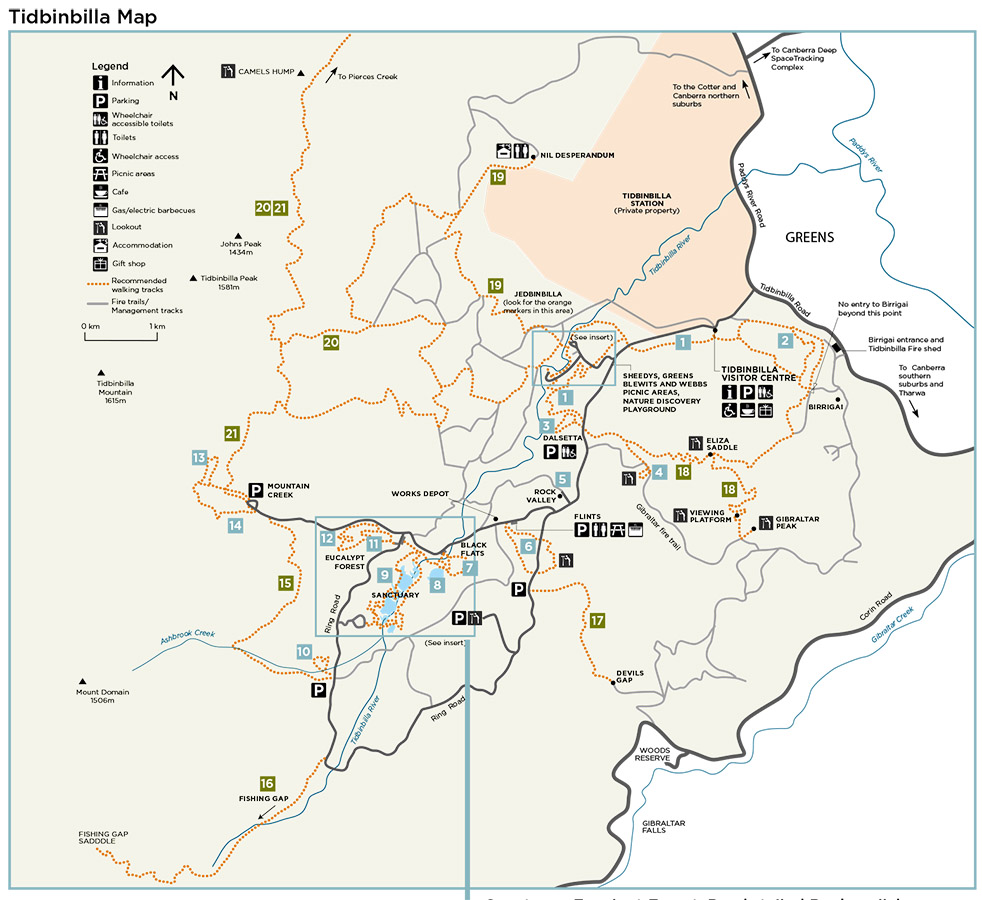 Tidbinbilla map and guide. This map provided as part of the reserve guide clearly identifies recommended walks but also shows additional roads from which you can create your own walks

Think outside the box

My undergraduate degree is in Landscape Architecture and I have a particular interest in trail design so when I go hiking I’m not just looking at the environment, I’m looking at the layout of the trail. It’s not uncommon for me to go against the recommended direction of travel based purely on ‘what feels right’. Often this works out but occasionally it doesn’t. When the parks and reserve staff set up trails they have a number of factors to consider so its not unusual for them to make use of pre-existing management trails. Just because a trail is set out in a particular manner doesn’t mean that’s the only option.

Spend time doing some research and see what you can find. In the Australian Hiker Podcast Episode 088 we talk to David Briese, one of the instigators of the  Great South Coast Walk. This trail doesn’t exist as a dedicated trail but consists of a number of pre existing tracks with the connecting pieces filled in to create a ‘choose your own adventure’ that is 660km long from Bundeena just south of Sydney to Mallacoota just over the Victorian Border.

Another well known ‘choose you own adventure’ walk is the Larapinta Trail in the Northern Territory and instead of using the trailhead adjacent to Mt Sonder start at Mount Zeal. You are supposed to get approval from the local parks service to do this walk for a number of reasons including safety, and avoidance of culturally significant areas. You may not know this but it was originally supposed to be one of the designated trailheads and for whatever reason it never eventuated. The Great South Coast Walk is an extreme example of creating a walk where one doesn’t formally exist but all it took was some creative thinking. When starting out, create something small and relatively easy even its its just a few kilometres long. We suggest you start out using a walk that you’re familiar with and seeing if you can extend or create

Taking a step back to basic hiking planning always play it safe. On all hikes that you do you should let someone know where you are going, what you are doing, and when you will be back. If you go off the designated trail and don’t tell someone it makes it that much harder to find you particularly if the rescuers are looking for you in a totally different area.

In addition, stay within your known limits and don’t try and do walks that you think look good but require a particular level of fitness or skill that you just don’t have. Its good to push yourself but be sensible about it. 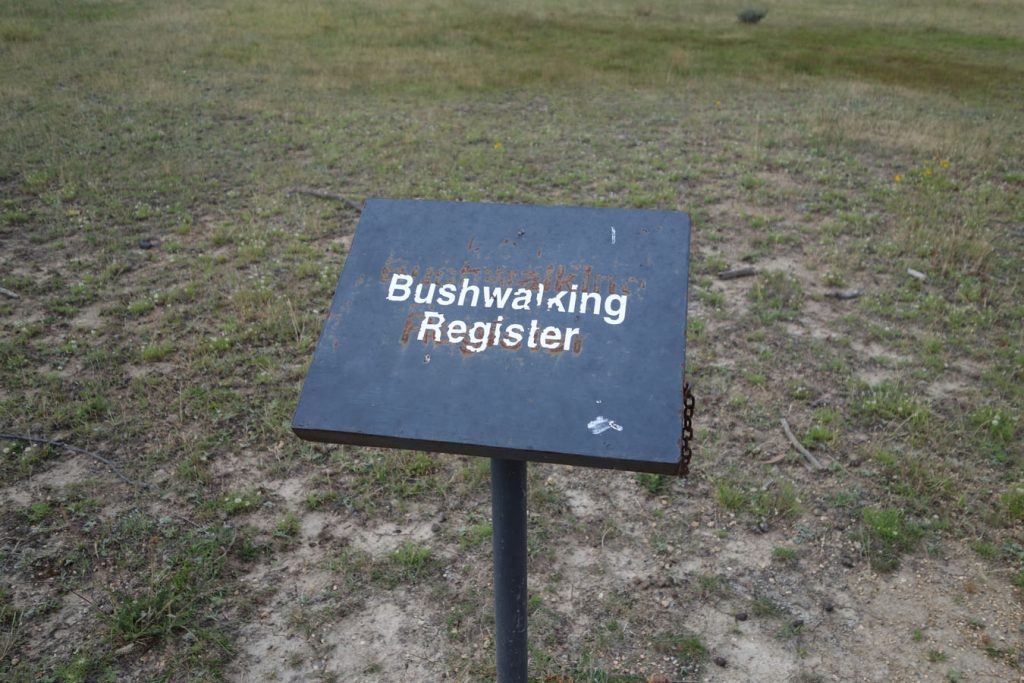 The following is a simple example of something we put together in the southern end of Namadgi National Park just outside of Canberra. It joins two pre-existing and designated walking tracks into one and for want of a better name we have called it the 4 Huts Walk. We did this walk with a car drop and it ended up being 15.8km long so makes for a good day walk or an easy overnight walk. If you only have one car and want to rerun back to your starting point, you need to add about 2.5km of road walking on top of this distance. There are plenty of ways we could have planned this walk and one of them is using Google Earth. This trail marked in red shows the complete loop coming back to the same spot we started at around 18.3km 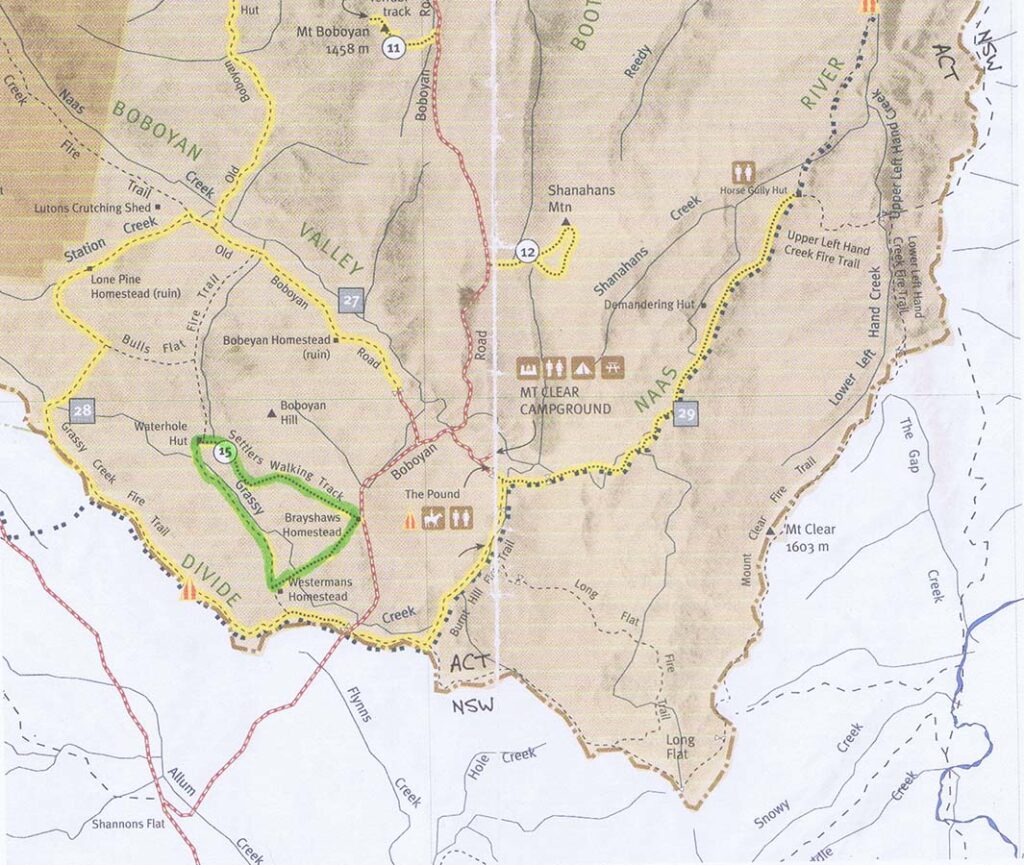 This is the map we used to plan this route that can be purchased for the Namadgi Visitor Centre. This map shows the Settlers Walking Track(10.2km loop) which contains three huts marked in green 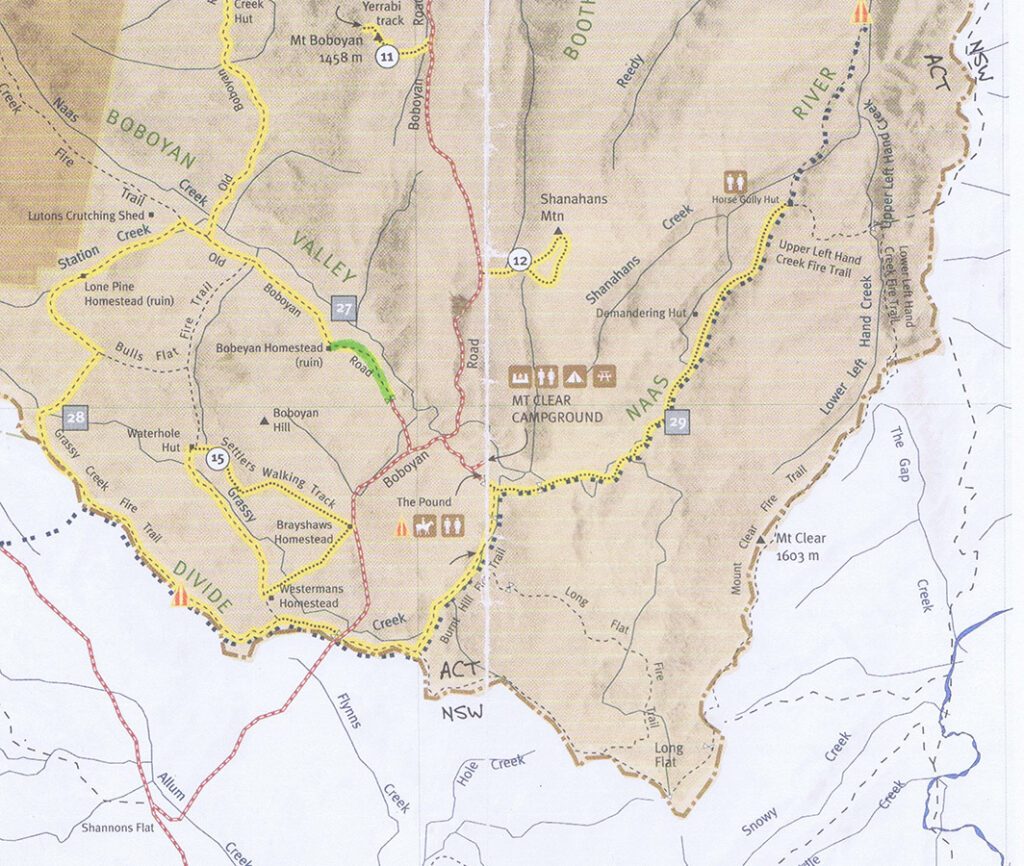 This is the map we used to plan this route and can be purchased for the Namadgi Visitor Centre. This map shows the  Old Boboyan Hut Walk 5.6km return both marked in green 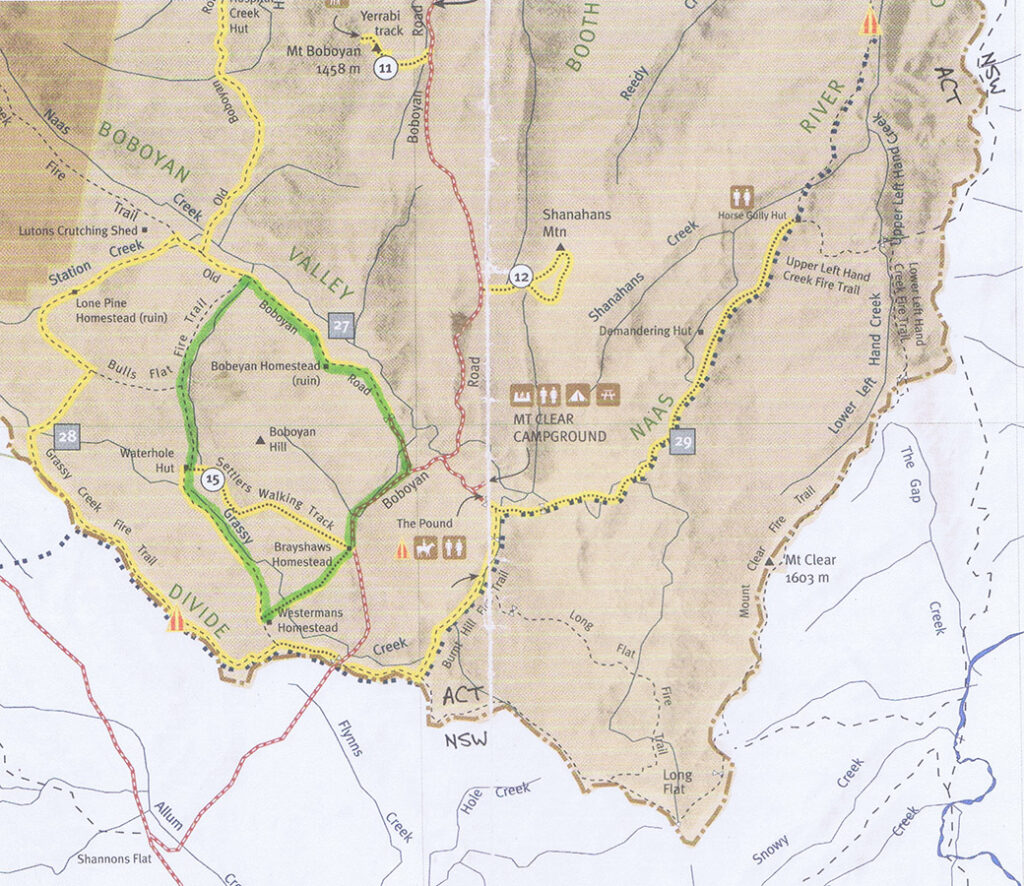 Walk done as a loop with just one car. In this walk you start and finish at the same point and have about 2.5km of walking along management road to get back to your car

While designated walking tracks are an easy option often limiting planning, sometimes you just want to do something a little bit different and in doing so you can create something really special. I need to own up here and say that I love the planning aspect of hiking just as much as the hiking itself so creating my own routes can be really enjoyable.

Having said that there is nothing wrong with sticking to the marked trails because no matter how hard you try you are never likely to do them all!

180-Choose your own adventure

Choose your own adventure