The Health Benefits of Hiking

As long as the humans have been around we have been looking at ways of improving our lives. Better ways to eat, better ways of protecting ourselves from threats, better ways of protecting ourselves from the elements. In the western world this never ending march to make our lives easier and more enjoyable has seen a large shift to urban living.  In 1911 less than 40% of the Australian population lived in urban centres and by 2011 this figure had grown to over 85%¹.

Along with this shift to an urban society, the past 100 years has seen a massive change in the technology that aids us in creating better lives; at least in theory. But with this improved lifestyle we are progressively becoming a less fit, fatter, more sedentary population, that spends little time exerting energy. So while our average lifespan is now at its longest, our fitness hasn’t necessarily improved. We are all aware we should be doing some form of exercise to maintain our fitness and keep healthy but who has time these days?

This is where hiking comes in. From an Australian perspective participation in hiking and bushwalking is a rapidly increasing activity seeing a doubling in the participation rate between 2010-2015. More than five million Australians now take part in hiking either occasionally or on a regular basis. This increased participation is also seen as a lifestyle choice rather than a fad² which is a good thing as getting outdoors into the bush has many positive impacts; not just physical but also emotional and mental.

So just what are the health benefits of hiking?

Let’s start with the obvious. Doing any form of exercise is going to improve your health. Over the past few years there have been a number of articles saying that ‘sitting is the new form of smoking’ with many Australians spending much of their office work day parked at a desk. Sitting or lying down for too long increases your risk of chronic health problems such as heart disease, diabetes and some cancers. Too much sitting can also be bad for your mental health³.

Standing or moving reduces the impact of a sedentary working life and what better way to move than to walk. What better way to walk than to hike. Carrying a pack or walking up inclines, even slight ones, increases your calorie burn and your exertion and with it, improves your cardiovascular fitness.

Engaging in regular exercise of any type will also help to reduce your blood pressure. Both my parents had high blood pressure and surprise surprise it’s something that I have to deal with. So long as I exercise regularly, and for me that’s mainly hiking, I have managed to avoid medication to control my blood pressure. 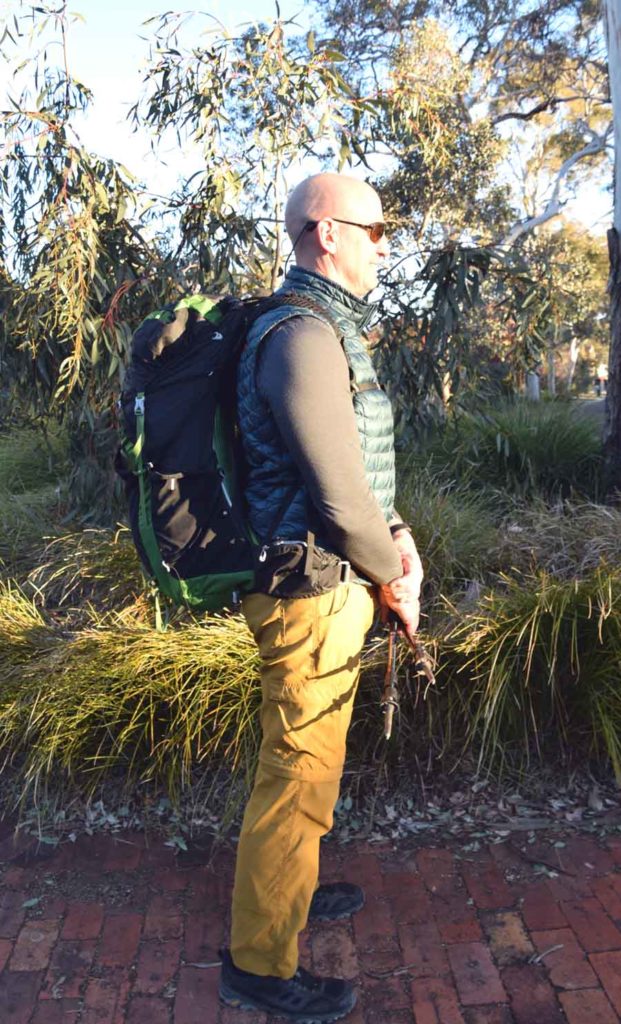 Just about to head off on a training hike with my 18.5 kg training pack

For many years the focus of fitness training was the cardiovascular system but we now realise the importance, to our overall quality of life, of muscle fitness/strength.

Sitting for long periods can lead to weakening and wasting away of the large leg and gluteal muscles. These large muscles are important for walking and for stabilisation and if weakened you are more likely to injure yourself through falls and strains when you do exercise (think old people). Weight bearing exercise such as carrying a weighted pack also improves bone density which is critical as we get older.

Also, walking on uneven ground and over difficult terrain improves your core strength by activating smaller muscles.  The benefits of core strength include:

Walking on uneven ground, even on well maintained trails forces your muscles to react and compensate. In addition to increased fitness, this will also result in increased balance and stability which can become a major issue as we get older. 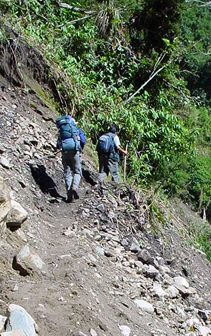 Uneven rough ground improves your muscle strength and with it stability

Like any exercise, hiking burns calories. In fact a hiker that weighs around 100 kg will burn approximately 550 calories per hour (2399 kilojules per hour). This figure will vary for each individual with smaller hikers burning around 440 calories. The heavier the pack, the longer the hike, the steeper the gradient changes, and the more uneven the ground will all add to calories burnt‌.

The other impact that hiking has in regard to weight loss is you lack access to large quantities of sugary rich food on longer hikes which add to the weight reduction on longer trips.

On my five week Bibbulmun Track thru-hike in 2018 trip I learned (via my Fitbit) that I was burning on average 5793 calories per day.  While I was unable to weigh myself until around eight days after the hike, I estimated I had lost around 15 kg all up.

All hikers will loose weight on hikes longer than a few days and the longer the trip the more you’ll lose but males in particular will tend to lose weight more rapidly. Not something that most of us really consider but I was surprised when I had some medical testing done recently as I discovered I was Vitamin D deficient. We usually get our doses of Vitamin D from exposure to the sun but Australians have been indoctrinated to being ‘sun smart’ by minimising sun exposure and covering up. In my case when my deficiency was detected it was winter time so while this wasn’t unusual, it was a surprise.

After a multi-week hike I was again tested and my deficiency had rectified itself.

A term that has become more common over the past few years is ‘forest bathing’. Developed in Japan during the 1980’s the idea is that if a person simply visits a natural area and walks in a relaxed way there are calming, rejuvenating and restorative benefits to be achieved. Walking doesn’t necessarily have to be involved but just getting away from urban centres into the bush has a calming impact on most people.

In a study undertaken in the US, increased urbanisation was associated with increased levels of mental illness, including depression. In some circumstances walking in a natural environment for around 90 minutes has been shown to minimise and reduce these impacts.

Another seperate study also found that exposing children with ADHD to ‘green outdoor activities’ reduced the symptoms significantly. This research suggests that for any person having a difficult time focusing or exhibiting impulsive behaviour, hiking can work far better than some prescribed medicines.

In a study undertaken in the US, it was shown that four days of immersion in nature, and the corresponding disconnection from multi-media and technology, increased performance on a creativity, problem-solving task by a full 50% in hikers. This improvement is thought to have been derived from an increase in exposure to natural stimuli that are both emotionally positive with a corresponding decrease in exposure to attention demanding technology. The latter regularly focuses on sudden events, switching amongst tasks, maintaining task goals, and inhibiting irrelevant actions or cognitions.

What it comes down to is, at a bare minimum most of us should all be doing more exercise. While this exercise could easily be inside a gym or even outside on a pushbike, the physical act of walking, requires a minimal outlay on equipment, even for those undertaking longer hikes. In addition, getting out into nature away from the urban centres helps in ways that gym based exercise can’t providing a more natural surface to walk on and a more natural environment within which to immerse ourselves. All improving your emotional and mental wellbeing at the same time.

Hiking is a year round activity for most of us even if we have to modify the type and lengths of hikes that we do because of climatic conditions. Hiking really does do it all!

The Health Benefits of Hiking