Blueberries, while readily available fresh or frozen in Australia aren’t as easy, as other fruits like apple or mango, to source in freeze dried or dehydrated form. Yes you can find them but this usually requires you to purchase online or buy through a health food store.

Blueberries taste great and are a terrific source of antioxidants so they represent and great option for hiking. However, blueberries are perhaps seen as a bit of a luxury fruit which is understandable given at the time I put this recipe together, they were just over $23 AUD per Kg. In fact, the recipe below which uses 600 grams of fresh blueberries, required $14 of blueberries to make. If you are going to dehydrate your own blueberries, pick a time of the year when they are readily available and relatively cheap.

I must admit I originally thought this recipe was a bit fiddly but then even apple require preparation so it wasn’t as bad as I originally thought. My reason for saying this is, that fresh blueberries (don’t use frozen blueberries as they can turn to mush) are extremely ‘watertight’ as a fruit goes and are loathe to give up the moisture. Fail to prick the skins and you are likely to be drying them for twice as long, if not longer!

The best way to prick their skins is with a corn holder. These handy little implements are present in just about every household, they are sharp without being dangerous and are just the right size. Put both tynes through each blueberry and go all the way through which means that each berry has four holes in it to allow the release of moisture. Even with spiking the blueberries, this recipe still takes up to around two days (44 hours on a medium heat) to dehydrate which is much longer than other more mainstream fruit like apples or bananas.

I used 600 grams of blueberries as it filled up an entire tray on my dehydrator. Given the size of blueberries to start with compared to the dried size, I used the small mesh insert with my dehydrator that means they didn’t fall through the standard tray mesh.

Turn the blueberries about 8 hours into the drying process so they don’t stick to the tray and to ensure they dry evenly. Test the blueberries every 4-6 hours to get the texture and dryness just the way you like it. I am happy to eat these slightly leathery to crispy. Even with such an extended period of drying there will still be the odd berry that is soft and I suggest you remove it and continue to dry it otherwise you run the risk of leaving moisture in the storage container. I also suggest removing the small berries once they have dried as these will be done before the bigger berries. Once dried, allow them to cool before placing in an airtight container/ziplock bag for later use.

Texture wise the end result for the dried blueberries is something that looks like a raisin and has the same slightly chewy texture. Taste wise they have a moorish concentrated blueberry flavour and in all honesty I prefer this to the fresh option.

This recipe is designed for a food dehydrator and in all honesty I would recommend that’s what you use due to the very long drying period. However if you don’t own one, then you can try a fan forced oven at a very low temperature 55-60°Celcius but given the time it takes to dry the berries, you may not want to tie up your oven for that long. If you are using an oven be careful about leaving them drying overnight because you may go to far in the drying process particularly with the small berries.

The end result for 600 grams of fresh blueberries is: Pricking each blueberry with a corn holder. Go through the entire berry with both tynes 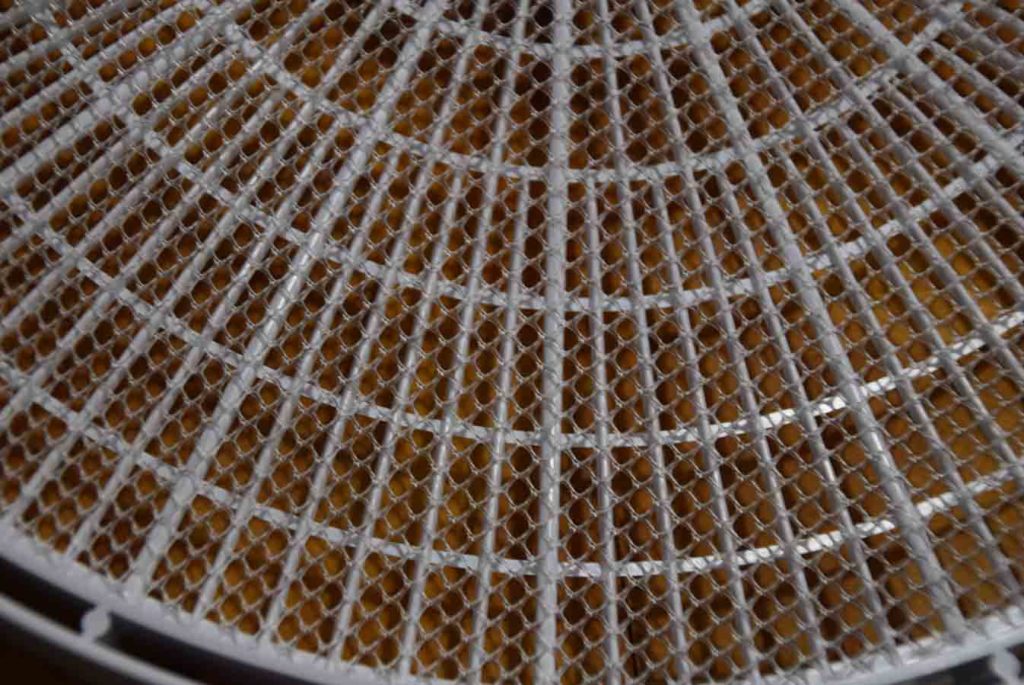 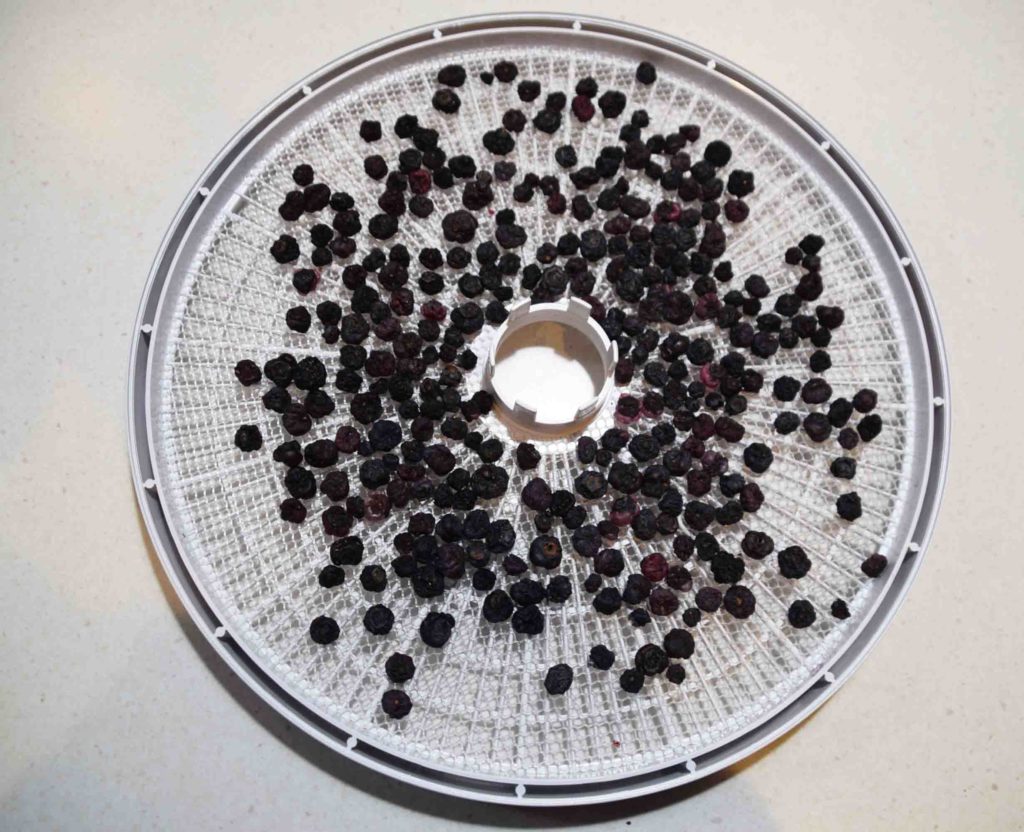 Dried blueberries after 44 hours. The original weight was 600 grams, the dried weight was 115 grams 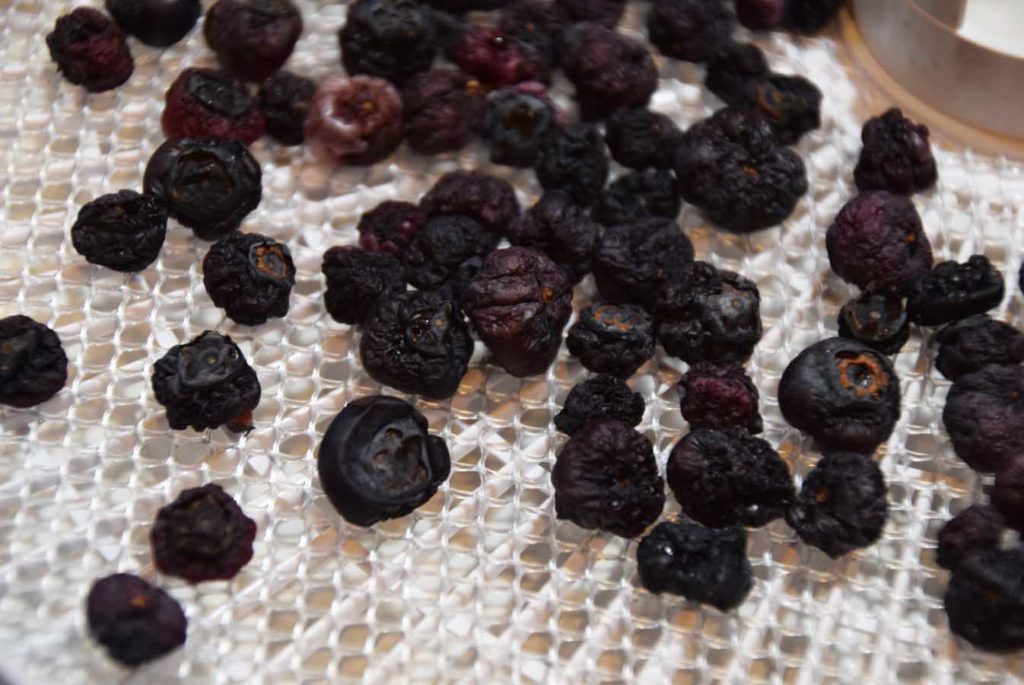