Recently Gill and I travelled to the NSW south coast to visit family after a four months hiatus due to the coronavirus pandemic. Normally we try to go for a hike, even if it’s a short one so before our trip I spent a few hours mining the internet, checking the state of the numerous nearby National Parks and what I found didn’t surprise me. Almost without exception, the National Parks on the coast road leaving Canberra, and along much of the section of the coast we were visiting, were either closed in part or closed fully.

We spent much of our first day driving along the coastline working our way northwards and stopping in to visit areas of the coast with which we were very familiar, at least before the fires. What we found as we passed matched the online advice from the NSW National Parks Service. There were barriers and signage across many access roads, either directly on the highway preventing any access altogether or where there were small communities adjacent to the burnt areas, there were signs advising ‘no access’.

The reasons for closure vary with the main ones being damaged roads or bridges, or dangerous trees. The NSW National Parks Service has been busy doing a huge clean up but the areas impacted are large and it’s going to take a long time to get things back to normal. In fact, the Namadgi National Park in the ACT has set out a three year recovery plan.

When we visited the Moreton National Park we first passed a ‘PARK CLOSED’ sign as we turned off the highway on our way to my sister’s property. The next day we decided to drive further into the park to have a look at the damage and sure enough, we came across a very obvious park closure sign as we approached the park proper that included tape across the road. One thing that surprised us were the groups of people ignoring the closure signage. In fact, when we stopped to take photos of the signs two cars drove around the closure tape and kept on going. In many cases the road closures are a hard close and pretty obvious but in others people can circumvent them either by accident or in the case we witnessed, deliberately.

The severity of the fires in some of the parks have created a huge number of dangerous trees which will take a long time to clear up. Entering areas that haven’t been made safe puts people at risk and this doesn’t just mean wayward hikers but potentially anyone who has to go in and rescue someone who gets into trouble, even when they are not supposed to be in there. The other negative outcome may be a much unwanted fine for being in an area you aren’t supposed to be in. What it comes down to is the need to take an extra few minutes to check your destination for closures or warnings.

And if the parks service says ‘closed’ they mean closed. They aren’t doing it for some petty reason; safety is the first priority.

While it may be inconvenient and even disappointing, we are experiencing very unusual times which will pass. For us having the parks ‘turned off’ has pushed us into doing a number of walks we have ignored over the years. We have discovered some real gems we didn’t know existed.

Of course, once we get can back into the real stuff, we’ll appreciate it all the more!

Park closure information available on the NSW National Parks Service website. Given the 2019-20, summer fires it is worth checking before you drive there 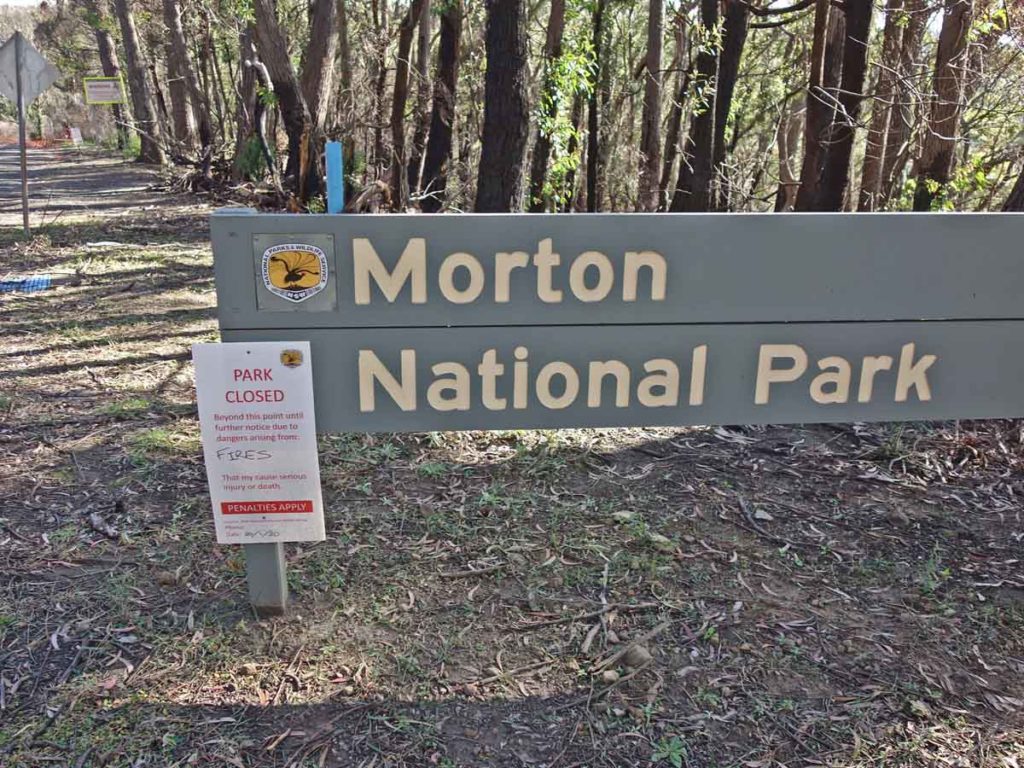 National Parks Service closure sign at Moreton National Park on the NSW South Coast. There was another sign on the highway turnoff as well 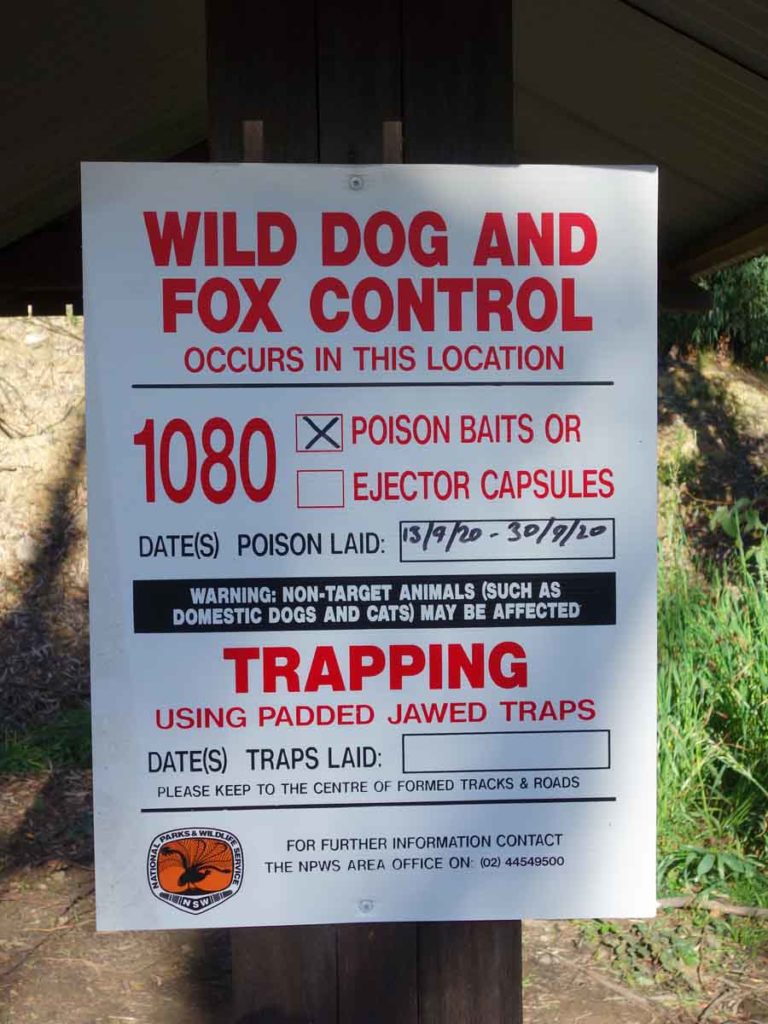 Animal baiting sign. Many National Parks are using the post fire period to remedy other issues, in this case wild dog and fox control 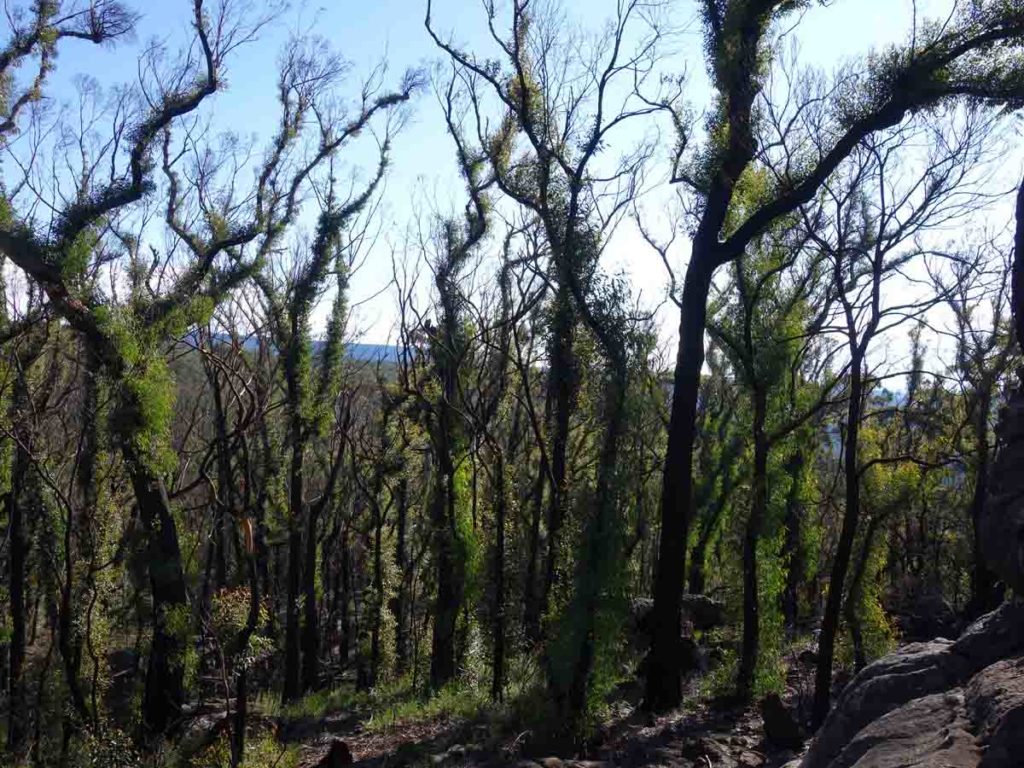