A Walk in the Woods Movie

A Walk in the Woods Movie Review

This is the movie version of the book by quirky American author Bill Bryson which was released in 2015 by Director Ken Kwapis (of among others Sisterhood of the Traveling Pants and He’s Just Not That into You fame).  This story recounts Bill’s attempt to hike the Appalachian Trail widely known as the world’s longest footpath (2190 miles/3524km).  It can best be considered as an adventure driven by a mid life crisis.

However, this comedy movie version stars Academy Award winner Robert Redford as the celebrated travel author Bill Bryson and another Academy Award winner, Emma Thompson, as Bill’s wife Catherine.  For those who have read the book this now starts to seem a bit strange – a mid life crisis starring Redford who at the time of the movie’s release was 79 and as much as I adore Thompson, I struggled with her at 56 being married to Redford.  But then I guess Redford figured if he was the co-Producer, he could also be the star!

If you can get past these obvious challenges A Walk in the Woods is an entertaining and at times very funny look at life, mid life crises and hikers.  There are a number of messages in the movie that you choose to embrace or ignore depending on your mood such as, nurture your life long friendships, you’re never too old and don’t take yourself too seriously.  And there’s also a bit of social commentary including about the devastation of the American Chestnut in the first half of the 20th Century because of Chestnut Blight that significantly changed the ecosystem in that part of the USA.

The Appalachian Trail features of course in the form of the spectacular and rugged countryside from Georgia to Maine which is showcased prominently.

Bryson is seeking an adventure to prove that as a ‘traditional’ travel writer he is still relevant in a modern world.  Bryson’s wife Catherine realises she can’t dissuade him from attempting the trail so forbids him from going alone.  Bryson then seeks out his ‘close’ long time friends only to discover that ageing has caught up with them (and even that one has passed away).  He ends up with long lost and former friend Stephen Katz (Nick Nolte).  Time has not been good to Katz but he still has a way with the ladies – albeit those now in a much older age bracket!  Nolte ensures that Katz is hard to like but after a while you realise he’s learned from his life experiences and he has a good heart.  Katz’s character is largely responsible for the M rating for this movie.

So the fun begins as two very different individuals settle into a hiking rhythm.  The characters they meet along the way are diverse, entertaining and at times kooky.  Of note is the know-it-all Mary Ellen (Kristen Schaal) who Bryson and Katz decide at first to befriend on the basis that even annoying people need friends.  But Mary Ellen soon has them hiding in the bushes to avoid her.

While the book fleshes out the details in just the right places and adds an extra layer of humour, the movie provides great visual impact and light-hearted viewing for a rainy day when you can’t get outdoors.

We have watched A Walk in the Woods on numerous occasions now and we still laugh at the same bits and still cringe at Mary Ellen – we all know someone like her and you hope that your hiking buds don’t think she’s you!

If you’re into a bit of lightweight and cheap movie watching, this one is for you.

For the book review go here 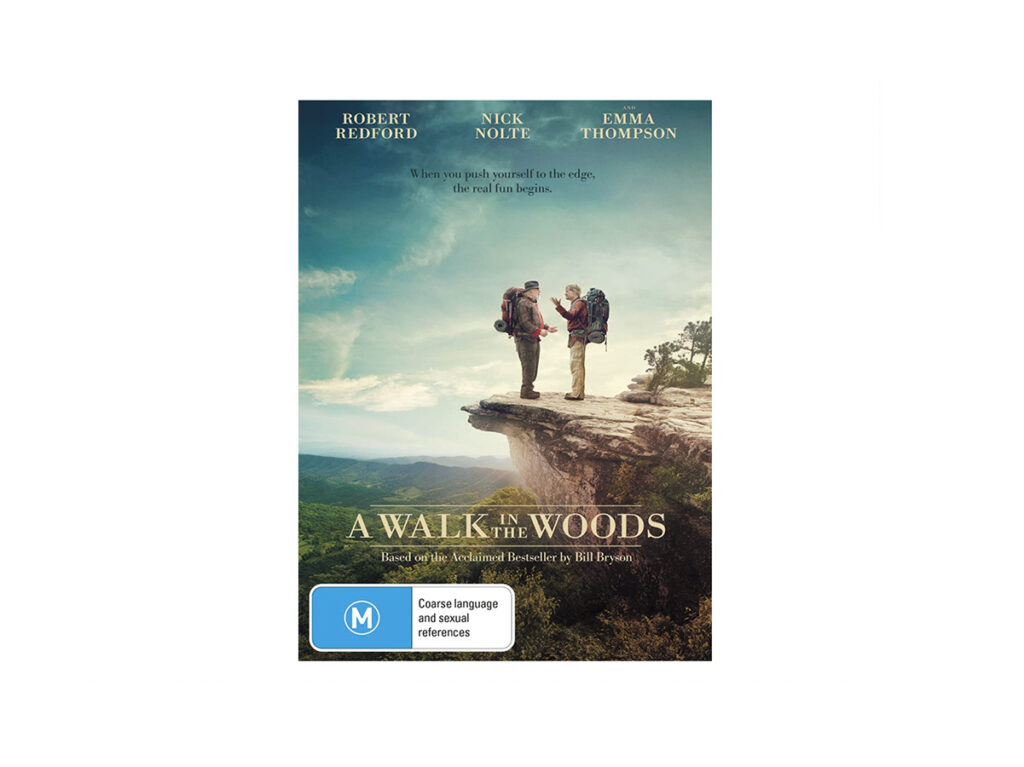 A Walk in the Woods DVD

A Walk in the Woods Movie